The Guidobono brothers, the refined lightness of baroque

Turin hosts an exhibition dedicated to the brothers Bartolomeo and Domenico Guidobono, whose frescoes in Palazzo Madama brought a festive decorative style to the city

From 29 May to 2 September, Palazzo Madama in Turin hosts “Fables and magic. The Guidobono brothers, painters of the Baroque”, an exhibition curated by Mary Newcome Schleier, Giovanni Romano and Gelsomina Spione focusing on the life and work of the two artists, Bartolomeo and Domenico Guidobono, best known for decorating the ceiling of Palazzo Madama, along with an extensive series of paintings on canvas held in the most prestigious European and American museums.
The Savona-born painters Bartolomeo and Domenico Guidobono were not well-known in Piedmont. Nevertheless, between the end of the 17th century and the beginning of the 18th they were entrusted with several important commissions in Turin. Following in the footsteps of their father, the painter and ceramic artist Giovanni Antonio, who drew a salary from Victor Amadeus II, the two brothers introduced to Turin the light and festive decorative style typical of Genoese residences, with its emphasis on light effects and elements drawn from nature. Both lived in Turin twice, more precisely between 1685 and 1690, and again from 1702 to 1726, when they painted the frescoes decorating the vault ceiling of the apartments of the second Madama Reale, Marie Jeanne of Savoy.
Their work is illustrated by paintings, drawings, and engravings that highlight their meticulous approach to depicting the details of their subjects, which ranged from mythology to Biblical stories, sacred subjects, still lifes, and magic scenes. Flowers, fruits, birds, animals, objects, and details of still lifes are painted with a refined, light touch and ooze seductive mystery.
The exhibition is arranged chronologically and begins with the work of the older of the two brothers, Bartolomeo Guidobono (Savona 1654 - Turin 1709). During his first sojourn in Turin, he painted the frescoes of the presbytery of the Casanova abbey near Carmagnola and a painting for Palazzo Madama, which was originally located in the former apartments of the Madama Reale and is now lost. During his second sojourn, from 1702 to 1709, Bartolomeo decorated both the residences of the Savoy court and church altars in Turin and the Duchy of Savoy. It is in this context that his Genoese-inspired decorations were made, such as those of the convent of San Francesco da Paola and the Pilone cupola, the ceiling in the hall currently known as the Madama Felicita apartment in Palazzo Reale, which are featured in the exhibition thanks to video images.
Domenico’s style began to emerge more forcefully after his brother’s death in 1709. The artist, who maintained a close relationship with the Madama Reale Maria Giovanna Battista, became the undisputed protagonist of the decorations of the halls on the first floor of Palazzo Madama, known as the Guidobono halls – the Madama Reale’s Chamber, the Chinese Cabinet, and the Southern Veranda – which were decorated on the orders of the Duchess orders between 1708 ad 1721. Domenico Guidobono was active in Turin and the rest of the Duchy until the ascent of Filippo Juvara, who eventually marginalized him and caused him to return to Genoa and subsequently to Naples, where he died in 1746. The exhibition delves into the life and work of Domenico Guidobono through recently discovered documents and artwork. The history of his art can be traced thanks to a dowry inventory put together by his daughter Maria Beatrice in 1720, which lists the works from her father’s Turin workshop. Today, most of these works are held in foreign museums, including the Louvre in Paris and the Metropolitan Museum in New York City.
The exhibition is enhanced by works by Genoese masters and other artists who were crucial influences on the Guidobono brothers, such as Domenico Piola, Gregorio De Ferrari, and Daniel Seyter. There is also a selection of engravings by Rembrandt and Castiglione, the stylistic points of reference underlying Genoese painting, followed by a section on project planning with preparatory sketches by Piola and De Ferrari from the Cabinet of Drawings and Paintings in Genoa’s Palazzo Rosso.

Domenico Guidobono, Portrait of a woman like Flora, 1709 circa, oil on canvas, 145.5x120 cm, Private collection 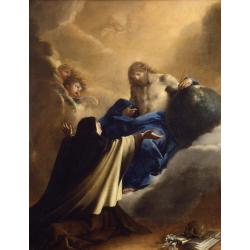 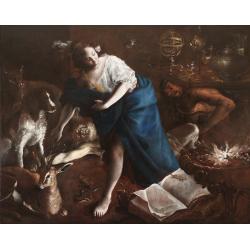 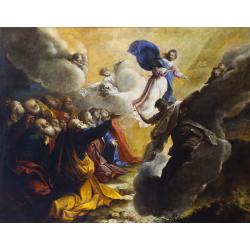 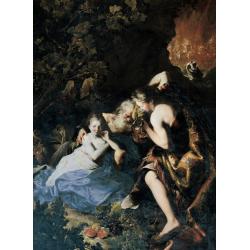 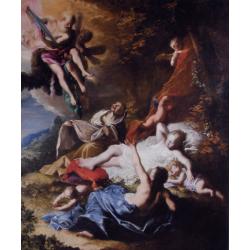 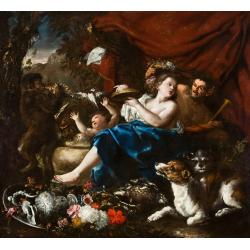 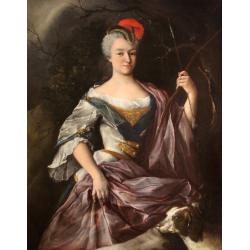 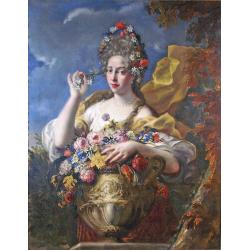