“Reflections of the Orient”, art history as seen through mirrors

Turin’s MAO exhibits 125 masterpieces from China and other Asian countries. Dating from the 5th century B.C. to the 10th century A.D., they show exquisite metalworking technique and great creativity

Understanding the meaning of mirrors in Asia and the cultural and artistic values of the rich imagery that decorates their rear surface: this is the focus of “Reflections of the Orient”, an exhibition running from 11 October to 6 January at the Museum of Oriental Art (MAO) in Turin.
The exhibition aims to help the public get to know and appreciate the charm and importance of these metalworking masterpieces, which not only accounted for some of the most important chapters in Chinese art history, but also help encourage a discussion of the differences and parallels between East and West. In particular, the exhibition provides an annotated overview of the significance of mirrors in East Asia, starting with the fact that the metallic rear of these objects was adorned by its designers and craftsmen with cosmological visions, more or less arcane symbols, and aesthetic concepts that embodied the hopes and goals of society in a given historical period.
The core of the exhibition, and its main attraction, comprises mirrors made in China between the Warring States period and the end of the Tang dynasty, namely from the 5th century B.C. to the 10th century A.D., a period that saw the greatest degree of experimentation and artistic and cultural interest in mirrors in East Asia.
Nevertheless, there are also mirrors from before and after that period. The former explore the origins and ‘proto-history’ of mirrors in China, while the latter highlight the artistic and cultural changes that took place over the years, together with continuities and breaks from the past in Chinese society. One section looks at links with other areas in East Asia – Korea, Japan, and Southeast Asia – that adopted the forms and symbolism of Chinese mirrors, and modified them to adapt them to their own cultures.
The exhibition features about 125 mirrors, most of which belong to a major private collection in Turin. The MAO has contributed several pieces from its own collection. The museum that has loaned the most mirrors to the exhibition is the National Museum of Oriental Art in Rome, with other significant contributions from the Guimet and Cernuschi Museums in Paris and the Vatican Museums 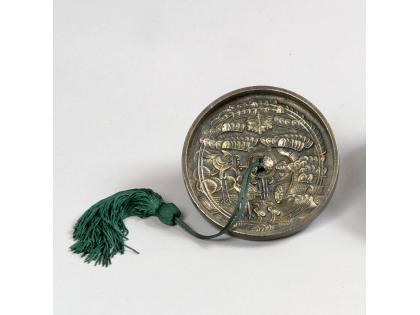 Reflections of the Orient