“The Ring of the Nibelung.”  The Uffizi hosts scenic designs and projections from the Fura dels Baus

An exhibit taking place in the Florentine museum tells the story of the Wagnerian opera according to the interpretation by a Catalan theatre company, and by orchestra conductor Zubin Mehta

From April 29th through May 31st, in the halls of San Pier Scheraggio in Florence's Uffizi Galleries, an exhibit will be dedicated to the Wagnerian masterpiece, Der Ring des Nibelung (The Ring of the Nibelung) in the version by conductor Zubin Mehta and the Catalan theatre company Fura dels Baus.

This colossal opera, also defined as Tetralogy, is made up of a series of four musical dramas, which recall the stories of the Greek tragedies. The structure of the series is a prologue followed by three days, named, respectively As Rheingold (The Rhinegold), Die Walküre (The Valkyrie), Sigfried and Götterdämmerung (The Twilight of the Gods).

The exhibit intends to recall the atmosphere and behind-the-scenes feeling of the tetralogy of the Mehta-Fura del Baus production, which received the Abbati Award from Italian music critics for the interpretations of Das Rheinold and Die Walküre. The exhibit will present sketches, models, and costumes against the backdrop of dazzling projections and next to stage machinery, true jewels of invention which have attracted, in particular, a large audience of young people drawn in by the director's language and style, ones quite similar to those used in The Lord of the Rings and in Star Wars. Among the stage machinery items, two Giants (Fafner and Fasolt) and the Dragon, placed in a context evoking indefinite atmospheres, creating even greater intrigue for the audience.

Indeed, in the subdued light of the first exhibit room, the Fafner Giant will be surrounded by 15th century frescoes by Andrea del Castagno for the Villa Legnaia depicting Illustrious Men and Women, among which stand out Farinata degli Uberti, Dante, Petrarch, Boccaccio and the Cumana Sybil. Thus will be created a kind of dichotomy and contrast between visual art and the artifice of these modern machines. The contrast between the ancient and the modern will be further accented by some videos placed in front of the Battle of Sann Martino by Corrado Cagli, and with the Battle of the Admiral's Bridge by Renato Guttuso. On the other hand, Moreno Bucci, the exhibit curator himself, defines the interesting atmosphere in the exhibit, stating: « In these spaces, utilizing different silences, the Dragon will begin to move about, commanded by a computer. The Dragon does not embody any one terrifying image from our collective unconscious. It composed, quite simply, of flat, conjoined geometric shapes which, as we near it, reflect our image and that of the persons around us. We become – infinitely multiplied – the actual faces of the Dragon. » 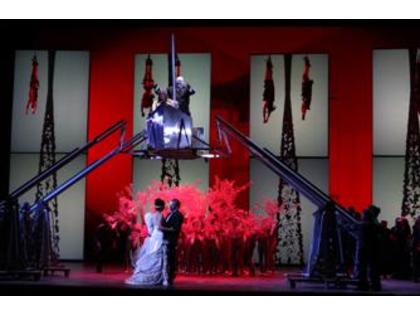 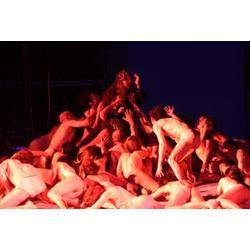