As the Italian-Russian cultural exchange year comes to an end, the Castle of Rivoli hosts an exhibition on the conquest of space and its influence on art

From 17 December 2011 to 26 February 2012, the Museum of Contemporary Art of the Castle of Rivoli (Turin) hosts “Russian Cosmos”, an exhibition curated by Olga Sviblova as part of the programme for the Year of Russian Culture and Language in Italy and Italian Culture and Language in Russia, with the support of the highest government institutions in both countries. The exhibition is the second leg of an international project that started with the exhibition “Arte Povera in Moscow. Works from the collection of the Castle of Rivoli” in Russia and is presented by the Castle of Rivoli and the Multimedia Art Museum in Moscow in collaboration with Civita.

The common thread running through the exhibition held in the castle of the House of Savoy is a dream: the yearning for outer space and its conquest, starting with the work of the Russian scientist Konstantin Ciolkovskij in the late 19th century, who designed spacecraft and established a research institute, and finishing with one of the institute’s directors, Sergej Korolëv,who supervised the construction of the first space capsules, called the Sputnik. Most of all, the exhibition pays tribute to the astronaut Yuri Gagarin on the fiftieth anniversary of his first space flight,which marked the beginning of the main Soviet, European, and American programmes for space exploration. Gagarin’s exploits meant that the legend of outer space took hold of the imaginations of Soviet citizens, inspiring children to dream of becoming astronauts, and influencing Russian artists and architects; indeed, one of the main themes of the Russian avant-garde was not the horizontal line, but rather the diagonal, which became an emblem of striving towards unknown dimensions, as seen in the works of Maleviče and the photographs of Rodčenko.
The exhibition is housed is six halls, each focusing on a specific theme and exploring the overlap between the scientific and artistic worlds in the Russian scene from the 1920s until the present. The works of thirty artists evoke scientific narrations, as do creative journeys through dreams and distance, machines and the imagination, conquest and contamination. The works on display include hand-crafted objects and models by Ciolkovskij, on loan from Russian museums, along with installations on the first Sputnik space capsules and the astronaut Gagarin, displayed side-by-side with cartoons and videos by the artist and architect Jurij Avvakumov, the winner of prestigious awards in the most important utopian architecture competitions held in Europe and Japan in the late 1980s. 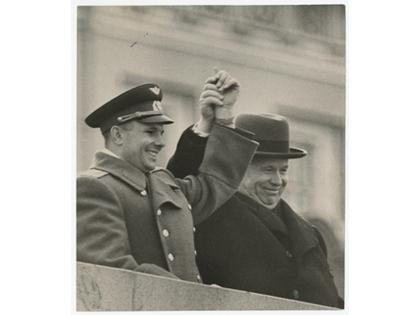