UNESCO warns that thirty Italian dialects are at risk of extinction

According to the UN’s cultural agency, about 6,000 local languages are at risk of extinction worldwide. In Italy, these include töitschu and guardiolo, but progress is endangering several varieties of Sardinian and Neapolitan as well

UNESCO sounds the alarm on the approximately 6,000 dialects at risk of extinction worldwide. This warning comes on February 21, International Mother Language Day. In Italy, the well-known Sicilian, Sardinian, and Neapolitan dialects are at risk, along with numerous other lesser-known local dialects.
Dialects are part of the cultural heritage of mankind. According to experts from the UN’s cultural agency, numerous indigenous languages, bearers of ancient knowledge, could soon disappear. In order to protect them, UNSECO has created an interactive atlas with information on endangered dialect types, their geographic area of origin, and the number of their native speakers.
Italian dialects at risk include töitschu, a language spoken by about 200 people in the small village of Issine, in the middle Valley of the Lys in Valle d’Aosta. Töitschu is spoken by the small walser community, the descendents of the aristocratic Vallaise dynasty, which dominated the lower Valle d’Aosta in the Middle Ages and enjoyed a special statute that granted them privileges.
A small community of 340 people still speaks guardiolo, an Occitan dialect typical of the historic hamlet of Guardia Piemontese (Cosenza). Occitan is a Romance language with roots in southern France; in Italy it is spoken in a few valleys in Piedmont, and expanded to the far south of the country after the internal migrations of the 14th century, by people seeking work and, especially, escaping the persecutions against the Waldesians.
A Slavic language spoken by about 5,000 people in Molise is also endangered, albeit not as critically as others: croato molisano is spoken in the municipalities of Acquaviva Collecroce (Kruč), Montemitro (Mundimitar), and San Felice del Molise (Filič), all in the province of Campobasso and about 30 km from the Adriatic sea. Croato molisano is part of the štokavo-ikavo group of dialects; in years past it was also spoken by the inhabitants of Palata, Mafalda, Tavenna, and San Biase, small towns also in the province of Campobasso.
Heading back south, and more precisely to Sicily, about 65,000 people in the towns of Nicosia, Sperlinga, Piazza Armerina, Valguarnera Caropepe , and Aidone (Enna) and San Fratello, Acquedolci, San Piero Patti, Montalbano Elicona, Novara di Sicilia and Fondachelli Fantina (Messina) speak gallo italico, a sort of northern Italian dialect in Sicily. This dialect is protected by UNESCO as intangible cultural heritage, along with the local territory and its traditions, since it is defined as a minority language enclave, that stands out for its substrate of Celtic languages, typical of much of northern Italy and spoken by the majority of the families descending from gallo-italic settlers.
The full list of the thirty Italian dialects at risk of extinction includes sardo campidanés, cimbriano, corso, emiliano, faetar, francoprovenzal, friulano, sardo galurés, griko calabrés, griko salentino, ladino, ligur, sardo, logudorés, lombardo, mócheno, piamontés, resiano, romaní, sasarés, siciliano, napolitano-calabrés, töitschu, veneciano, yiddish, alemánico, alguerés, provenzal alpino, arberés and bavaro.
Experts identify two main threats to these dialects: “external forces”, such as military, economic, cultural, and religious domination; and “internal forces”, especially the negative attitudes that younger generations have towards dialects. In addition to these two forces, rapid urbanization and migration modify traditions and customs, thus sacrificing archaic dialects on the altar of progress. 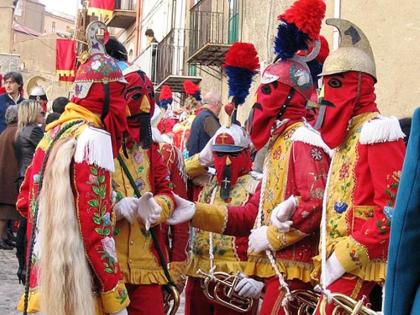 Feast of the Jews, San Fratello