This is the westernmost known example of cuneiform script. The engraved stone was found during archaeological digs directed by Alberto Cazzella in the Tas-Silg sanctuary

Italian archaeologists working in Malta have made a sensational discovery: an agate carved with cuneiform script dating back to the 2nd millennium BC, but whose votive nature can be traced to the city of Nippur, in Mesopotamia. The finding took place during an excavation campaign conducted by an archaeological mission from the University of Rome “La Sapienza”,  led by palaeontology professor Alberto Cazzella, in collaboration with the University of Foggia, represented by Giulia Recchia, and in agreement with the Superintendence of Cultural Heritage in Malta, directed by Anthony Pace.

The agate is shaped like a crescent moon. It can be deduced from the inscription that a group of worshippers dedicated the precious stone to the moon god Sin, who was worshipped in the city of Nippur (Ninurta) in Mesopotamia. The stone was found during archaeological digs carried out in Tas-Silg, one of the few sanctuaries that were in use continuously throughout the centuries - at least from the third millennium BC to the Byzantine era – comparable only to the Umayyad Mosque in Damascus. Tas-Silg was a megalithic temple during the late Neolithic; significant traces from that era still remain. During the Phoenician-Punic era, it was transformed into a sanctuary to Astarte, while in the Roman era Juno was worshipped there. Finally, it was a baptistery during the Byzantine era.

The script on the agave opens the way for new scenarios. Interpreted by Father Werner Mayer of the Pontifical Biblical Institute in Rome, who ascribes it to the 13th century BC and the city of Nippur, in Mesopotamia, it is immediately evident that its presence in Malta is exceptional. How did it get to the sanctuary of Tas-Silg? Ninurta was for a lengthy period of time the main divinity in Nippur, until it was replaced by Enlil. According to tradition, Ninurta was the son of the Moon god, and for this reason Nippur was considered a holy city, with many temples, and a pilgrimage site that hosted a renowned school for scribes that produced numerous literary texts.

The discovery becomes all the more alluring and mysterious in light of the fact that agate was not found in that area of Mesopotamia; the presence of script from that area suggests that agate was considered extremely precious due to its rarity. As such, its use as a votive object suggests that it was an exceptional donation on the part of a group of worshippers. Analyses on its origins are not yet available, but agate was mined both to the east of Mesopotamia – in India to be exact – and to the West.

Its arrival in Malta remains shrouded in mystery; it is likely that the stone was looted from the temple of Nippur by armies at war with the Babylonians. Having fallen into the hands of Cypriot or Mycenaean merchants, who had trading relations with Sicily and the central Mediterranean at the time, it was likely brought by them from the Near East to Malta.

Additionally, the presence of an exotic agate artefact in the Tas-Silg sanctuary during the last centuries of the second millennium (late Bronze Age) – an artefact that was certainly considered to be of value, even though its inscription presumably could not be deciphered by its owner – suggests that the sanctuary may already have been a cultural landmark of far more than local significance, as it certainly was during the Phoenician and Roman eras.

Other finds will perhaps help us interpret these events; otherwise, the finding of the agate will remain an emblematic case in archaeology. In the meantime, the excavations conducted by the Archaeological Mission of Rome’s La Sapienza University, which began in the 1960s in collaboration with the Catholic University of Milan, and which were re-launched in 2003 to encompass the prehistoric levels of the third and second millennia BC, undoubtedly have more surprises in store. 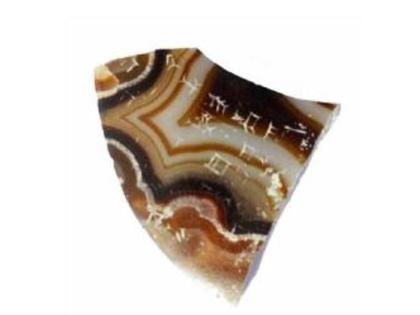