From Volpedo to Tortona, the life and work of Giuseppe Pellizza

An itinerary in Alessandria province follows in the painter’s footprints, starting in the places where he worked and which provided inspiration, and ending at the new permanent exhibition dedicated to Divisionism, where a large body of his work is on display

In the late 19th century, Giuseppe Pellizza da Volpedo (Volpedo, 28 July 1868 - 14 June 1907) distinguished himself as a particularly astute observer of reality and the transformations affecting society, which he depicted in his works with sincerity, yet free of sentimentalism.
The artist was born into a family of small landowners. His father Pietro, a fervent follower of Garibaldi, recognized his only son’s talent, and encouraged him to pursue his avocation. At the suggestion of Alberto and Vittore Grubicy, he enrolled in the Academy of Fine Arts in Milan, where he studied under Giuseppe Puricelli and subsequently Pio Sanquirico, as well as Francesco Hayez and Giuseppe Bertini. After completing his studies in 1887, Pellizza spent some time in Rome and Florence, where he studied at the school of Giovanni Fattori, then continued his education at the Carrara Academy in Bergamo, where he studied under Cesare Tallone, an innovator in the field of portrait painting who taught his students to pay maximum attention to detail, in order to depict their subjects in the most realistic manner possible. During that time, Pellizza became friends with Silvestro Lega, and was influenced to some degree by macchiaiolo painters.
The painter, who loved nature and landscapes above anything else, decided to move back to his native town of  Volpedo (Alessandria), in order to paint in isolation and strive for a much-desired renewal of the art form; from that moment on, he signed his paintings “da Volpedo”. Living with his family, including his father, and his dearly beloved wife Teresa Bidone, whom he married in 1892, he continued his artistic research, making occasional forays elsewhere to experience the artistic climate and ideas that were emerging in large cities in those years, including Milan, Florence, Rome, and especially Paris, which he first visited in December 1889, on the occasion of the World’s Fair.
Over the course of his brief career, before his tragic death at the age of 39, the artist initially fell under the spell of the study of the human figure, and subsequently shifted his attention to landscape painting, spurred by Fattori, who encouraged him to concentrate on the rural landscape and develop and interest in social realism and the work of Jules Bastien Lepage, a French painter who focused on the rural world and left a mark in Pellizza’s painting. The artist went through an impressionist phase, as he himself declared, and a divisionist one, which he began after his contacts with Segantini, Morbelli, and Longoni, and which he embraced wholeheartedly, deeming it the most suitable technique for representing nature. However, his dreams of art and success were shattered by a death in the family: just as the artist was beginning to taste success after years of devotion to his art, his wife died due to childbirth complications. In just one day, Pellizza lost his beloved Teresa and his third child. The overwhelming pain brought Pellizza to a state of depression which extinguished all vital impulses, leading him to commit suicide in his own studio on the morning of 14 June, 1907.
Between 2000 and 2001,  the Municipality of Volpedo decided to pay tribute to the artist with an itinerary called “Pellizza’s places”, an outdoor museum of sorts through the streets of the town. In order to replicate the 19th century atmosphere and help visitors travel back in time to the painter’s days, ten large-format replicas of his paintings have been positioned in the town’s streets, in the places that once inspired his paintings. This itinerary, put together by the Municipality of Volpedo, the Province of Alessandria, and the Piedmont regional administration, has several stops, including the artist’s studio, in Via Rosano 1, where his easel is on display; Piazza del Quarto Stato, where Palazzo del Torraglio, which houses the “Pellizza” Museum, is located; Pellizza’s birthplace, where the artist spent his childhood and where he lived as an adult with his family; the itinerary also includes the places that inspired the artist to paint works such as Piazza di Volpedo (1888) and Volpedo on a Sunday morning (1891). Additionally, the parish church of Volpedo hosts a painting of San Luigino (1894), commissioned by the parish priest, of which an earlier version can be seen in the artist’s studio.
The itinerary we propose here focuses on two of these stops: the studio and Piazza del Quarto Stato, and continues to Tortona, where the Fondazione della Cassa di Risparmio’s Pinacotheque holds some of Pellizza’s most important works, which reflect some of the key moments in his career. 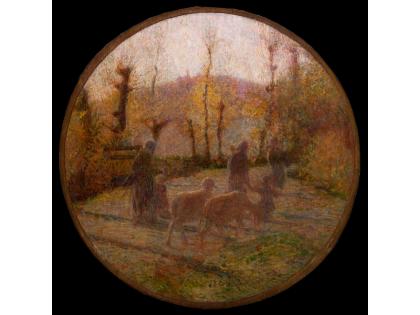