The recently departed “lady of architecture” was responsible for many major restoration efforts in Italian and foreign museums. In Italy, some of the most important ones concerned Palazzo Grassi in Venice, Spazio Oberdan in Milan, the Scuderie del Quirinale in Rome, and Palazzo Branciforte in Palermo

«The only contemporary female architect of whom I can say, without any reservation, that she is culturally and professionally responsible, in the first person, for all of her projects »: with these words, at the end of the 1970s, the architect and university professor  Emilio Battisti paid tribute to Gaetana "Gae" Aulenti (in the essay “Architettura è donna”, in Gae Aulenti, Electa, 1979), who would later be nicknamed “the lady of architecture”.
Gae Aulenti – who was born in Palazzolo dello Stella, Udine province, on 4 December 1927 and who died in Milan on 1 November 2012 – graduated in architecture from the Milan Polytechnic in 1954, and two years later became a copy editor for «Casabella Continuità». Over the next ten years, until 1965, she worked for the magazine and actively took part in the architectural debate of those years, together with leading architects of the day, including Giancarlo De Carlo, Vittorio Gregotti, and Aldo Rossi. In particular, «Casabella»’s editor  Ernesto Nathan Rogers (1909-1969) was a «spiritual father» for her, and she became his teaching assistant at the Polytechnic.
Her first projects, including her home in the San Siro neighbourhood in Milan in 1958 and her weekend home in Brianza in 1959, reflected her participation in the neo-liberty movement. During those same years, she also designed furniture and objects, including  Sgarsul, a rocking chair she designed in 1962, and two years later the couch Stringa, both designed for Poltronova; along with the chair Aprile and the lamp Pipistrello in 1963.
From 1976 to 1979, she worked with Luca Ronconi at the theatre design workshop in Prato, an experience that would prove crucial for her future output. Indeed, as Aulenti herself stated (Cleto Munari, Gioielli, argenti, vetri, orologi, Edifir Edizioni, Florence), in 1975 «there was a keenly felt need to move forward, beyond the Modern Movement; those who did not want a clean break tried to change their point of observation. The difficulty of practicing architecture meant that all research moved towards literary approaches. There was a very strongly stated admiration for drawing and for the depiction of architecture; there was an attempt, with a rightly critical approach, to free architecture from the sociological blanket that was suffocating it; there was a desire to practice architecture while burdening it with the impossibility of doing so. At some point I asked myself: where can one built spaces that are truly defined by literature? And the answer was: the theatre….». In the same essay, Aulenti states that what she got out of the theatre experience was her awareness of the role of the spectator: «During a seminar at the theatre design workshop in Prato we asked ourselves what the spectator meant to the performance. In other words: what is the work we are doing when we attend a performance? These reflections were of great use to me, including in museum design, because I was able to keep the end users in mind while having a good idea of who they actually are, but not in a sociological sense. This new relationship with the visitor also helps me when I am designing a home. The old notion of “everyday use” was never satisfactorily defined. Thanks to my experience in theatre, I can give “everyday use” a much broader meaning ».
Indeed, Aulenti was responsible for the interior design and renovation of several prestigious museums both in Italy and abroad, including the lunettes on the vault ceiling of the Musée d’Orsay, with their floral theme (1980-86), and the Centre Pompidou (1985-1986).
Some of her most important creations include the Tonale Pass Vacation Centre (1962), the Olivetti showrooms in Paris and Buenos Aires (1967-1968), the new Gallery in Milan’s Palazzo della Triennale (1984), the restoration of the Venaria Royal Palace (Turin province), followed, in Turin itself, by the renovation of the Palavela for the 2006 Winter Olympics, the restoration of the Estense Castle in Ferrara in 2003, the Institute of Italian Culture in Tokyo in 2006, and the restoration of Palazzo Branciforte in Palermo in 2012, when the building was turned into a multi-purpose cultural centre.
In 1987 she was named Chevalier de la Legion d’Honneur by the President of the Republic of France and Commandeur de l’Ordre des Arts et des Lettres by the French Minister of Culture. In 1989 she was awarded the Special Award for Culture by the Presidency of the Council of Ministers of the Italian Republic.  In 1995 she received the title of Dama di Gran Croce dell'Ordine al Merito of the Italian Republic, and in 1999 the Sigillo Longobardo award from the Lombardy Region. On 16 October, a few days before her death, she received an Honorary Award for her career from the Milan Triennale.
Museums and exhibition spaces featured prominently in Gae Aulenti’s lengthy career. Some of her main projects in Italy included the renovation of Palazzo Grassi in Venice, the Spazio Oberdan in Milan, the Scuderie del Quirinale in Rome, and Palazzo Branciforte in Palermo. 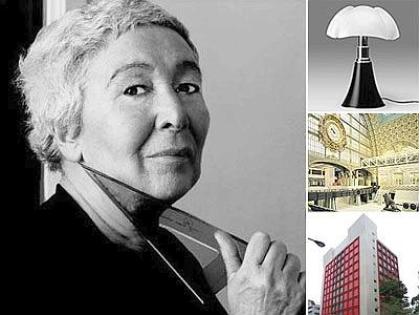