For Medieval enthusiasts, the Castle of Avella provides a veritable journey back to that time. Just a few kilometres from Lauro, the Longobard Castle of Avella was considered a key fortress during the Middle Ages, due to its strategic position. Indeed, Avella stands atop a promontory at an elevation of 206 meters, on the foothills of Mount Avella. The Clanio torrent runs through town.

The castle was mentioned as early as Erchempert’s famous Historia Longobardorum, according to which text the castle belonged to Guaimar I of Salerno. Due to its strategic position, the castle played a role in numerous wars, two of the most significant of which included the Saracen invasion of 884 and the Magyar invasion of 937. The castle was subsequently rebuilt by the Normans, but lost its military functions and was instead turned into an aristocratic residence. After being partially destroyed during the 1465 earthquake, it was renovated by Pietro Spinelli in 1553, but in spite of this costly effort it was completely abandoned towards the end of the 16th century.

Avella has other attractions in addition to its Medieval castles. They include the ruins of the ancient city of Abella, destroyed by the Samnites in 87 B.C. because it had remained loyal to Rome during the Social War.  Along with an archaeological park, which houses the ruins of the forums and the necropoles, parts of the ancient Roman aqueduct can still be seen. 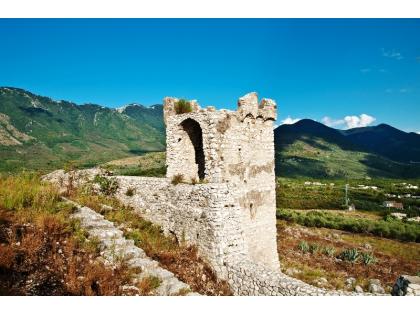