The perfectly preserved Ducal Castle of Bisaccia houses an Archaeological Museum. Built around the 8th century by the Longobards, the fortress stands atop a spur on Mount Calvario. The first mention of the castle dates back to a deed of donation written around 1077, which cites “Richard, Baron of Bisaccia” as the owner of the fiefdom. The castle was subsequently inhabited by the Normans, who conquered it thanks to an army led by Roberto d’Altavilla. After being destroyed by an earthquake in 1158, it was rebuilt in keeping with the wishes of Emperor Frederick II around the end of the 13th century. After the Aragonese conquest, the castle was inhabited by Isabel, wife of Ferdinand I, in 1462. In the 16th century the castle hosted Torquato Tasso, who was a friend of its new owner Giovan Battista Manso.
The castle houses an archaeological museum with various noteworthy items, such as the grave goods from “Tomb 66”, also known as the “tomb of the Princess of Bisaccia”, from the Iron Age (late 9th-8th century B.C.). The tomb was discovered in 1975 in the Cimitero Vecchio necropolis. It is of great interest because of its extensive grave goods, comprising  vases made of coarse clay (jugs, cups, small amphoras) and potter’s clay (jugs, ollas). Other finds include bronze vases imported from the lands of the Etruscans, including a phiale baccellata and two basin vases with large lunate handles. Hall II of the museum houses a life-size replica of the tomb. 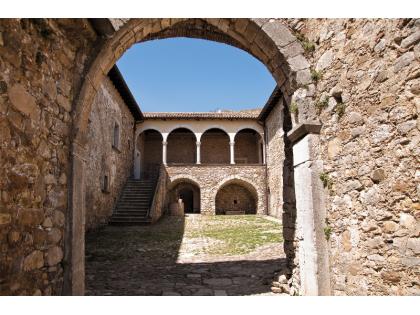