One of the best-preserved fortresses in Campania is Lancellotti Castle in Lauro, which stands atop a hill located between the western slopes of Mount Faito and the Pizzo d’Alvano mountain chain.

According to historical sources, the castle – which is the town of Lauro’s most symbolic monument – was built in the early 11th century. Since then, it has been at the heart of numerous historical events. A document from the 10th century mentions a certain Raimundo, lord of "Castel Lauri". In 1278 the fiefdom was acquired by the Del Balzo aristocratic dynasty, and subsequently changed hands several times, from the Orsini to the Pignatelli family and finally, in 1632, to the Lancellotti family, the current owners of the castle.

After having been destroyed by the French in 1799 in response to an anti-repubblican revolt, in was rebuilt by Filippo Lancellotti in 1872;  for this reason, the building’s interior features typical architectural elements from that period. Gothic, Renaissance, and Baroque elements are all present, in keeping with the eclectic fashion of the 19th century known as architectural revivalism, also known as Neo-Gothic, Neo-Renaissance, or Neo-Baroque.

The castle’s interior is also quite characteristic. Its courtyard, decorated by a fountain, features Roman architectural elements. A second courtyard leads to the Lancellotti family chapel. The castle is open to the public, and still inhabited by the prince. 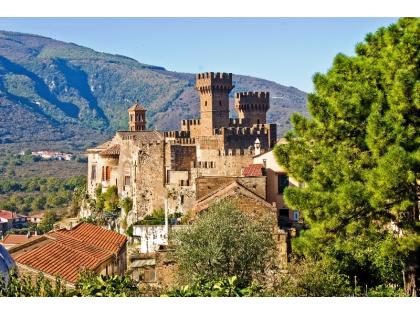