Visiting the Longobard castles of Irpinia, an area in Avellino province rich in ancient fortresses, stone keeps, ruins, and historic villages, is like a journey to the Middle Ages. This itinerary features a selection of castles, all of which are quite well preserved and open to the public. Beginning with Lancellotti Castle in Avella, it continues with the Ducal Castle of Bisaccia, Macedonio Castle in Grottolella, the ruins of the Castle of Mercogliano, and finally the Castles of Montemiletto, San Barbato, and Taurasi.
What all these castles have in common, in addition to their excellent conservation status, is their Longobard origin. After numerous events – from earthquakes to war – modified their original architecture, the castles on the itinerary were almost all turned into aristocratic residences – some of which briefly hosted illustrious personalities – by the lords who lived there, and who still do in some cases. One of the most noteworthy of these aristocratic homes is the Lancellotti Castle in Lauro, a monument that symbolizes the revivalist movement of the 19th century, while the Castles of Bisaccia and Taurasi have both been documented to have hosted Torquato Tasso; in addition, the former houses a Museum of Archaeology, while the latter hosts the Regional Enoteca of the Wines of Irpinia. 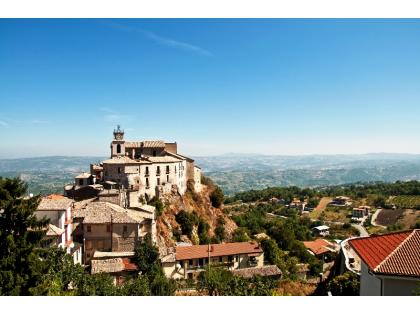