The future of museums: “More space, services, and technology in order to grow”

The directors of the three most-visited public museums in Italy – the Uffizi Gallery, Palazzo Ducale in Venice, and Florence’s Accademia Gallery – speak out. Projects for 2013 include restoration efforts and major exhibitions

Florence and Venice are the cities where Italy’s most-visited museums are located. With regards to public, state-owned, or civic facilities, and excluding archaeological areas, data from 2011 processed by the Statistics Office of the Ministry of Cultural Heritage and those made public directly from the institutions concerned show that the most-visited museum is the Uffizi Gallery, with about 1,766,345 visitors. In addition, Florence also boasts the third-ranked museum, the Accademia Gallery, with 1,252,822 million visitors.
The Polo Museale of Florence also holds down the sixth-place spot with the itinerary comprising the Silver Museum, Porcelain Museum, Boboli Gardens and the Galleria del Costume (714, 22).
Second place is held by Palazzo Ducale in Venice, part of the Musei Civici della Serenissima Foundation, with its 1,403,524 visitors.
The top ten also includes museums in Rome, in fourth and fifth place: the National Museum of Castel Sant’Angelo (981,821 visitors) and the Central Museum of Italian Unification (821,000). The Vatican Museums are excluded from the rankings, since they are in a foreign state.
Turin holds the seventh, eight, and tenth spots with the National Museum of Cinema (608,448 visitors); the Egyptian Museum (577,042), whose stakeholders include the Piedmont Region, the Province and Municipality of Turin, Compagnia di San Paolo, and the CRT Foundation; and the Venaria Reale Royal Palace (534,777), managed by a Cultural Promotion Consortium comprising the Ministry of Cultural Heritage and Affairs, the Piedmont regional government, the City of Venaria Reale,  Compagnia di San Paolo and the 1563 Foundation for Art and Culture.
Ninth place is held by Vanvitelli’s monumental complex in Caserta, including the Royal Palace, Park, English Gardens and the Museo dell''Opera e del Territorio, with 571,368 visitors.
At the end of a year’s worth of work, and as we await data for 2012, we went to the three most-visited museums and asked their directors to explain the reasons behind their success identify potential problems, highlight the necessary requirements for further expanding their potential for growth, and discuss upcoming projects. 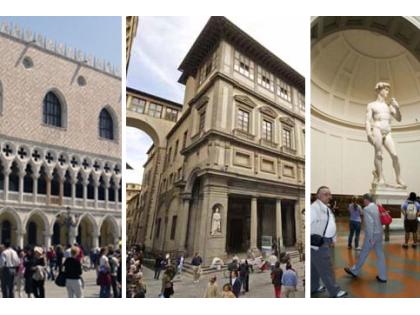 The three most visited museums: Uffizi, Palazzo Ducale in Venice and Accademia Gallery in Florence