Two educational workshops for children in the 5th and 7th grades help them learn about the museum’s collections and the building where they are held, the Episcopal Palace: the former traces the history of the institution, while the latter focuses on portraits

December 6 marks the opening of “Vado al Mast...”, an educational workshop in Tarquinia (Viterbo) to encourage children to discover that city’s Museum of Sacred Art (MAST). The workshop runs on premises restored in 2010 thanks in part to funding from the Cariciv Foundation, and located in the Episcopal Palace, which also houses the museum itself. The educational activities on tap for 2012/2013 are focused on “The museum” and “Portraits”.
The goal is to valorize the Museum’s art collections; the new educational programmes and the new set-up of the exhibition space, which was designed by Valentina Valerio and Barbara Deledda, reflect the desire to promote and conserve a valuable cultural trove, a commitment that the Episcopal Palace itself had historically taken on for its own cultural institutes.
The workshops, which are aimed at local schoolchildren in the 5th and 7th grades, comprise two projects, focusing respectively on the museum and on portraits. Each workshop is divided into three phases, beginning with a visit to the Mast, with a particular focus on the chosen topic;  the museum visit is followed by classroom discussion of the topic at hand, and finally a creative workshop run by the illustrator Roberta Angeletti.
The initiative aims to encourage children to enjoy art, while keeping in mind the significance of the building that houses it. The museum, which opened in 2001 in the Episcopal Palace built by Cardinal Pompeo Aldovrandi between 1734 and 1752, features paintings, furniture, and sacred furnishings from Tarquinia’s places of worship, including precious works from as early as the 13th century, such as the plate depicting the Blessing Christ.
The workshop presents the museum’s brief history, beginning with the oldest collections and ending with the newest ones, highlighting their date, goals, and characteristics. It discusses and documents the cultural reasons that led to the establishment of museums, along with various museum’s approaches to displaying their collections (especially Roman museums), and the exhibition choices inherent in the educational  tools chosen, the placement of the works, the backgrounds, illumination, frames, and furniture.
The characteristics and goals of portrait galleries will be discussed in the other workshop; pupils will be encouraged to create their own galleries by portraying characters from their school. The material produced will be collected and conserved in order to be included in a future series of illustrated brochures on local art history and the conservation of the area’s cultural heritage. 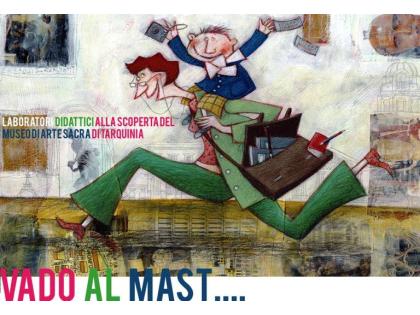