The Museum of Modern and Contemporary Art of Trento and Rovereto celebrates its tenth anniversary with a yearlong exhibition in the Rovereto venue, featuring over one thousand works from the collection

From 26 October 2012 to 6 October 2013, the MART Museum of Modern and Contemporary Art of Trento and Rovereto will celebrate its first ten years with the exhibition “The Magnificent Obsession”, held on the second floor of the Rovereto venue. The exhibition – whose director Cristiana Collu defines with a plethora of adjectives «a self-taught, divining,  auto- da- fé of works. A disturbing and perturbing, re-composed collection, maniacal and fetishist, an obscure object of desire. Secrecy, sharing, drunkenness, celebration.  Vertigo of miscellany», was staged thanks to the collaboration of numerous art and museum curators, including Nicoletta Boschiero with Veronica Caciolli, Margherita de Pilati, Duccio Dogheria, Daniela Ferrari, Mariarosa Mariech, Paola Pettenella, Alessandra Tiddia, Denis Viva, and Federico Zanoner.
The idea for the exhibition, which will last nearly a year, was born out of the obsessive element that has often influenced the taste of collectors, and which is reflected in many of the collections donated to or held in storage by the MART. This was the premise for a broader investigation of the MART’s holdings and the desire to present them to the public from a new perspective.
The MART’s holdings comprise varied and extensive collections arranged by theme, with in-depth examinations of selected groups of items. The tenth anniversary exhibition, on the other hand, intends to provide a broader and more complete overview of the collection by displaying about 1,200 works, starting with those of Andrea Malfatti and encompassing the entire 20th century to include Richard Long’s “Trento Ellipse”, made with local porphyry stone.
The itinerary is arranged chronologically, but also reflects the evolution of themes and subjects, eschewing temporal planes. Under such an approach, the works are arranged according to criteria that may be defined as «anticipation of the present», or «archaeology of the future», bringing to mind the spirit of 19th century salons. The itinerary also brings to light all the activities associated with the collections, such as their conservation, restoration, study, and institutional relations.
In addition to paintings, sculptures, archive documents, graphic art, photographs, books, rare publications, posters, applied art and furnishings, Futurist avant-garde and Italian art masterpieces from the 1930s to the 1970s, the exhibition also presents works designed and created by contemporary artists – such as Emilio Isgrò, Liliana Moro, Paco Cao, Christian Fogarolli and many other - delving into the topic of “the magnificent obsession”. 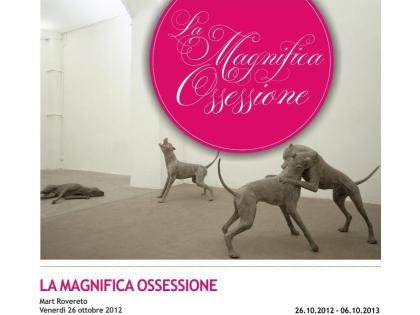