This exhibition venue in Valle d'Aosta re-opens its doors to the public after a renovation effort, with 150 works from its 1,500-strong collection. The exhibition focuses on Italian figurative art from the late 19th century to the second half of the 20th, paying particular attention to Alpine landscapes

A new and exquisite exhibition venue enhances Valle d’Aosta’s cultural attractions. Thanks to an effort spearheaded by the Education and Culture Department of the Regional Administration, the restoration of Castello Gamba has been completed, with the aim of promoting the region’s castles and historic residences, and making them accessible to the public. This new museum dedicated to contemporary and modern art, and located in the municipality of Châtillon (Aosta) – together with the Ussel Castle, which hosts temporary exhibitions in summer, and the private Passerin d’Entrèves castle – opened its doors to the public on 27 October.
The castle, built by Baron Carlo Maurizio Gamba between 1901 and 1903 and owned by the Valle d’Aosta Autonomous Region since 1982, houses the region’s collection of modern and contemporary art, comprising over 1,500 works assembled over a span of sixty years through acquisitions, donations, bequeathments, and awards. The works mostly depict Alpine landscapes and local peoples, with paintings and works by authors as varied as Turner, Juillerat, Ashton, Delleani, and Bazzaro.
The exhibition – which does not fail to examine participation in 20th century international art culture as a sign of belonging to the European and Italian art communities – takes up thirteen rooms over two floors. The selected works on display, curated by Rosanna Maggio Serra, comprise 150 works including paintings, sculptures, installation art, graphic art, and photographs from the late 19th century to the present.
In addition to works by 20th century master such as Martini, Mastroianni, Manzù, Arnaldo and Gio Pomodoro, Casorati, De Pisis, Carrà, and Guttuso, the exhibition also documents Italian figurative art from the second half of the 20th century, and takes in contemporary artists such as Schifano, Baruchello, Rama, and Mainolfi.  The exhibition also delves into the movements that enlivened the Italian art scene over the last 25 years thanks to works documenting Informal Art, Geometric Abstracticism, the Transavantgarde, and Pop Art. Finally, it pays a special tribute to Italo Mus (1892-1967), Valle d’Aosta’s most symbolic artist, in the space dedicated to temporary exhibition and covered roof garden on the third floor. 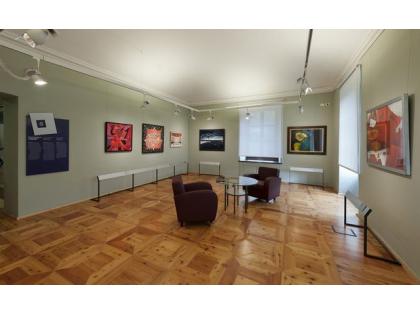