The replacement of the Sindone Chapel’s marble furnishings is underway

The Piedmont Regional Directorate for Cultural and Landscape is forging ahead with the restoration of the architectural masterpiece that was damaged by a fire in 1997; the chapel’s load-bearing capacity will be restored

Fifteen years after the fire that heavily damaged the Sindone Chapel in Turin, one of Guarino Guarini’s most famous works from the 17th century, the Piedmont Regional Directorate for Cultural and Landscape (Ministry of Cultural Heritage) has issued an update on the state of the restoration and structural renovation work on the Chapel. On the night between 11 and 12 April, 1997 a short-circuit caused a devastating fire in the Chapel; the restoration effort that began immediately thereafter was initially hindered by a glut of calls for tenders and lawsuits.
Costing a total of € 14 million, the restoration activities have so far been carried out through three public competitions, three competitions for service contracts, seven informal open bidding competitions for services and labour contracts, and several dozen research and experimentation contracts with the Turin Polytechnic, the University of Turin, and experts in various disciplines.
The operational phase that aimed to fully restore the chapel’s load-bearing surfaces encountered difficulties and problems of such an extent that procedures for termination due to breach of contract were launched against the contractor by the Regional Administrative Tribunal after the start of the works, which were awarded to the contractor in 2009. This was a very serious setback, which caused major delays to the restoration effort. The contract dispute was solved on April 30, 2012, when the Arcas Spa company was awarded the contract.
In the last several months, the restoration effort has thus entered its most delicate and complex phase, which calls for the replacement of about 1,550 marble elements that were seriously damaged by the fire and which could not be strengthened, out of a total of 5,454. Once these elements are replaced, the chapel’s load-bearing capacity will be fully restored.
The estimated cost for the operational phase of the restoration of the load-bearing structures is estimated at € 8.7 million; work is expected to end by March 2014. More specifically, the work includes: the strengthening o removal and subsequent replacement of the marble columns of the minor order and the replacement of the lesenes of the major order; the dismantling and re-instalment of the crooked arch with the strengthening of the architrave upon which it rests and of the arches and openings of the basin; the strengthening of the walls of the tunnels at the base of the loggia and of the masonry on the loggia’s pillars; the repair and tensioning of the window chains; the addition of new chains in the  windows and rack; the strengthening and renovation of the rack’s masonry arches and ogives; the reparation of the lesion at the base of the tholobate along the chapel’s circumference; the strengthening of the relieving arches for the ogives in the upper tunnel of the tholobate and other necessary interventions.
Once the initial renovation phase is complete, the newer additions to the chapel’s decorative apparatus will be restored, along with bronze elements, external surfaces, and doors and windows. The Regional Directorate has committed to raising funds for this phase, which was not included in the original project from 1999. 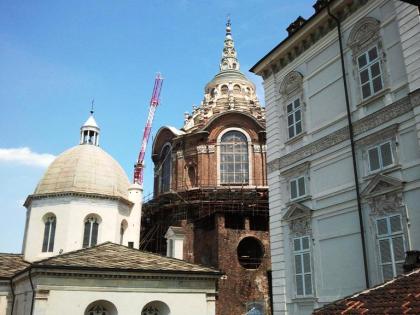