Commissioned by Charles of Bourbon, following the example of the Louis XIV’s Palace of Versailles, the Palace of Caserta was designed by the architect Louis Vanvitelli.

His construction started in 1752: initially the supervision of works passed to his son Charles Vanvitelli and then it continued under the guidance of other architects until 1847. The slowdown in the works was due to the decline in interest (and in funds) after the departure of Charles III.

Under his successor, Ferdinand IV, the court lived the Palace only during the warm season, while Ferdinand II, the last King, elected it as his favorite residence. The Palace belonged to the goods of the Crown of the Bourbon (except during the Napoleonic interlude), and then of the House of  Savoy until 1921, when it passed to the State. The building is rectangular on plan with four courtyards, divided by two blocks of the central building, which are perpendicular intersected. The original project also included two semicircular wings, embracing the enormous square overlooking the main facade, nowadays isolated.

The two identical facades - one facing D’Armi’s square and the other one the park – are made in brick and travertine with ashlar basement, a double row of windows and a balustrade on the top floor.

The entrance hall of the Palace leads to the lower vestibule with a perspective on the four courtyards, which open the view to the park. The spectacular Stairway of Honour (Scalone d’Onore), with a big central flight of stairs, followed by two lateral flights, conducts to the upper vestibule, which is octagonal on plan and illuminated by large windows. In front is the Palatine Chapel (Cappella Palatina), rectangular on plan with a semicircular apse, decorated by polychrome marbles. Its barrel vault, adorned with ceiling coffers and golden rose windows, is modelled on that one at Versailles.

On the left of the Chapel are the Royal Apartments, which include the Throne Room, preceded by Antechambers, the King’s apartment and that one of the Queen.

The Antechambers are: the Hall of Halberdiers (Sala degli Alabardieri), The Guard Hall (Sala delle Guardie del Corpo) and the Hall of Alessandro (Sala di Alessandro), which acts as a link between eighteenth-century environments and nineteenth-century ones. In the left-hand wing is the 18th century apartment and, in the right-hand wing is that one of the 19th century (also known as the new Apartment). The new Apartment (Appartamento Nuovo), realized during the years of the French Kingdom, is introduced by two Antechambers of neoclassical style, the Mars Hall (Sala di Marte) and the Astral Hall (Sala di Astrea), where the military virtues are exalted.

The Throne Room (Sala del Trono), the largest of the Royal Apartments, has Corinthian pillars on the walls, while the architrave is decorated with the portraits of the Royal Family by various sculptors.

The Council Room (Sala del Consiglio), that gives access to the private apartment of the King, presents a vaulted ceiling, frescoed by Cammarano on the theme of Minerva crowning Art and Science, and walls, decorated with 19th century paintings; in the middle of the room is a table, decorated with porcelain medallions and folk costumes of the Kingdom. Then there are the Antechamber and the Bedroom of Francis II (Anticamera e Stanza da letto di Francesco II) with Empire style furniture in mahogany and golden bronzes, while the Bathroom of the King (Stanza da bagno di Francesco II) has a counter top in Carrara marble with a basin of granite, decorated with leonine protomes and the fresco of Ceres on the vaulted ceiling by Cammarano.

The first and the second Antechamber and the Bedroom of Joachim Murat contain some furniture brought from the Royal Residence of Portici: the commode and console in mahogany and the golden bronzes are in French Empire style, as the bed and the chairs, that are upholstered in silk with the monogram of the Sovereign, while the walls are decorated with paintings.

The 18th Apartment (Appartamento del Settecento), the first one to be lived by Ferdinand IV and and Maria Carolina, is preceded by four conversation rooms, called the Season Rooms (Stanza delle Stagioni) due to the frescoes of the vaults.

The first room of the Apartment of Ferdinand I of Bourbon (Appartamento di Ferdinando I di Borbone), the so-colled “His Majesty’s rich Cabinet”(Gabinetto Ricco di Sua Maestà), is decorated with the furniture of the famous German furniture-maker Weisweiler and with gouache paintings of Hackert, representing the royal sites.

Four small environments in the Maria Carolina’s Apartment (Appartamento di Maria Carolina) stand out for the decorations in the typical Rococo style; the decoration of the Workroom, with yellow satin walls, framed by mirrors, is very impressive; the Cabinet of the Stuccoes (Camera degli Stucchi) leads to the Bath-chamber (Gabinetto per uso del Bagno) and to theChamber for the Inner Circle (Gabinetto ad uso del Ristretto), with Venetian mirrors, putti, frescoes by Fischetti and a marble basin with trompe l’oeil decorations.

The boudoir continues via in the Drawing Room (Sala di Compagnia), then the Room of the Court Ladies (Sala delle Dame di Compagnia) up to two reading rooms, antechamber of the Palatine Library (Biblioteca Palatina), that consists of three rooms, decorated by the German painter Fugger. The elliptical Room, which was originally used for courtly amusements, contains a reconstruction of the Royal Nativity Scene: this is the way to the Picture Gallery, a collection of works (still lifes, battle scenes, Hackert’s series of ports of the Kingdom of the two Sicilies), which are distributed in various rooms, and some of them, as the so-called Quadreria, expose the Royal’s portraits of the Bourbon dynasty.

The back rooms of the Historic Apartments contains the contemporary art exhibition “Terrae Motus”, assembled by the gallery owner Lucio Amelio after the 1980 earthquake. It includes works of the greatest contemporary artists (Warhol, Hearing, Schifano, Beuys, Pistoletto).

Lastly, the Theatre is extremely important: situated in the west side of the Palace, it is the small-scale replica of the San Carlo Theatre of Naples and has five orders of boxes with a sumptuous Royal Box. Inaugurated in 1769, this is the only room completed by Vanvitelli père by the will of Ferdinand IV.

Besides the building, Vanvitelli designed the surrounding Park, a splendid example of the giardino all’italiana (Italian garden). 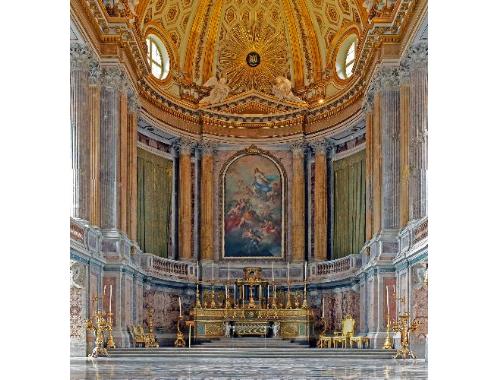 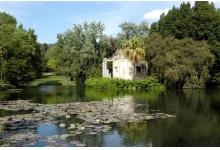 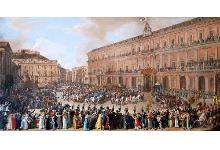 View resource in MuseiD-Italia
Go to top of the page